Treatments for cancer can affect fertility in different ways. Before you start treatment, talk to your doctor or nurse about your fertility. They may talk to you about storing sperm.

Your fertility means being able to start a pregnancy. For this to happen, a woman's egg needs to be fertilised by a man's sperm.

The parts of your body that help you do this are called the reproductive system. This includes the testicles, penis and prostate gland. The pituitary gland at the base of your brain is also important for fertility. It releases hormones (chemical messengers in the body) that control how your reproductive system works.

Your fertility depends on:

The testicles start to make and store sperm from puberty onwards. This process is controlled by hormones that are produced by the pituitary gland and testicles. The testicles make the hormone testosterone. This hormone is also important for sex drive and getting an erection.

To start a pregnancy, you will ejaculate during vaginal sex. The fluid you ejaculate is called semen. Semen is mostly made up of fluid from the prostate gland. It also contains sperm from the testicles. If one of the sperm reaches the woman's egg, the egg may be fertilised which will start a pregnancy. Some people have difficulty starting a pregnancy in this way and may need fertility treatment to help them. 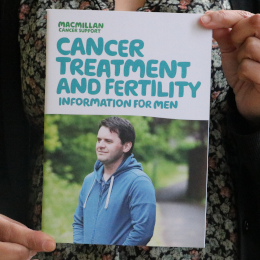 Booklets
Cancer and fertility – information for men
This booklet is about how cancer and its treatments can affect your fertility.

How cancer treatment can affect fertility

Doctors may not be able to predict how your fertility will be affected. But your planned treatment can help give an idea of your individual risk. Sometimes, it may be possible to reduce the effects of treatment on your fertility.

Treatments can affect your fertility in different ways. They can:

Cancer and cancer treatment can also change how you feel about sex. It is common to have problems with sex drive and getting an erection (erectile dysfunction) during or after cancer treatment.

We have more information about coping with side effects that can affect your sex life.

Chemotherapy uses anti-cancer (cytotoxic) drugs to destroy cancer cells. It can reduce or stop sperm production. This can affect fertility. This is usually temporary, but for some people it can be permanent.

The effects of chemotherapy on your fertility depend on the following:

Sometimes it may be possible to choose a chemotherapy treatment that is less likely to affect your fertility. Your cancer doctor will tell you if this is an option for you.

It may take time for your fertility to recover after chemotherapy. Problems with sperm production should not stop you getting erections or enjoying sex.

Radiotherapy uses high-energy rays to destroy cancer cells. It can cause fertility problems by:

Your risk of infertility depends on the dose and type of radiotherapy you are getting. If you have radiotherapy to an area of the body we do not mention below, this will not cause infertility.

Types of radiotherapy that may affect fertility include:

Surgery can reduce sperm and testosterone production. It can also cause problems with erections and ejaculation. Types of surgery that can affect your fertility include:

For some types of cancer, hormones encourage the cancer cells to grow. Your cancer doctor may treat you with a hormonal therapy drug. This reduces the levels of hormones in the body or blocks their effect on cancer cells. Doctors may use it to treat prostate cancer or breast cancer in men.

Side effects can include loss of sex drive and problems getting or keeping an erection. These may improve gradually after treatment ends. This can depend on whether you have had other treatments, such as pelvic radiotherapy or surgery.

There are different ways to help improve these side effects. Your cancer or fertility doctor can give you more information about this.

It is not yet known exactly what effect these treatments may have on fertility. If you are treated with a targeted therapy or immunotherapy drug, your cancer doctor can talk to you about possible risks to your fertility.

If your fertility does recover, it is difficult to predict when this will be. This could happen without you being aware of it. If you do not want to have a baby, you should keep using contraception unless doctors tell you the infertility is permanent.

Talking to your medical team about fertility

Having children is an important part of many people’s lives or their future plans. It is important to talk to your cancer doctor or specialist nurse about fertility before you start cancer treatment.

Some cancer treatments are unlikely to affect your fertility. Others may cause fertility problems during treatment or for a short time afterwards. Some treatments cause long-term or permanent damage to fertility.

Your cancer doctor will explain the possible risks to your fertility. If treatment might make you infertile, your doctor should talk to you about having your sperm stored. You usually do this before your cancer treatment starts. This is called sperm banking.

If you become infertile, you may be able to use the stored sperm to have a child in the future.

Your cancer doctor can refer you to a fertility clinic straight away. This means that having your sperm stored should not delay your cancer treatment. Sometimes, cancer treatment has to start quickly. In this case there may not be time for sperm banking.

A specialist fertility counsellor will be available to support you and your partner, if you have one.

Questions for your medical team

Below are some questions you might want to ask your medical team before cancer treatment.

Ways of preserving your fertility

It can be hard to know if cancer treatment will affect your fertility or if it will return to normal after treatment. Even if you have a low chance of becoming infertile, you may be referred to a fertility doctor before you start cancer treatment. The Human Fertilisation and Embryology Authority (HFEA) has information about NHS and private fertility clinics.

The fertility doctor may advise you to store (bank) sperm. Freezing and storing sperm is a safe procedure that has been used for many years. You can store sperm if you have reached puberty and are producing sperm.

Your sperm can then be used in the future to help you and a partner try to have a baby. Your fertility doctor can talk to you about fertility treatments that may help in your situation. They will also offer you counselling or further support.

Before sperm samples are stored, you will be asked to sign a consent form that explains how your sperm will be used. The staff at the fertility clinic will talk to you about this and explain your options.

You will have a blood test, to check for infectious diseases such as hepatitis and HIV. This is standard procedure for anyone storing sperm.

Sometimes, it may be possible to collect a sample at home and take it to the clinic. You will need to keep the sample warm and take it to the fertility clinic soon after producing it. You can talk to your nurse or doctor about this.

The fluid or tissue that is collected is looked at under a microscope in a laboratory. Any sperm are removed, frozen and stored for future use.

Sperm extraction can be done before cancer treatment starts. It can sometimes be done after treatment if you have not had sperm stored.

For some types of cancer, you may have sperm extracted during surgery to treat the cancer. Your doctor will tell you if this is an option for you.

If you have retrograde ejaculation, your sperm and semen go into the bladder instead of out of the penis when you orgasm.

The NHS often provides sperm storage if you are affected by cancer. But in some areas of the UK, you may have to pay for it yourself. The staff at the fertility clinic will tell you what is available in your area.

Even if storage is funded, using the sperm for fertility treatment in the future may not be. This means you may have to pay for this treatment. Your doctor or nurse will give you information about costs in your area.

Sperm is usually stored for at least 10 years. If you are affected by cancer, it can be stored for up to 55 years. Your samples will be frozen and stored in a tank of liquid nitrogen. This is called cryopreservation.

Your body only starts making sperm after puberty. If you need cancer treatment before puberty, you cannot store sperm.

Boys who have not reached puberty may have testicular cryopreservation as part of a research trial. This means collecting and freezing small samples of tissue from the testicles.

Researchers are seeing if the tissue can be used to produce sperm. They are also researching whether the tissue can produce sperm if it is put back into the body after cancer treatment. This research is still at an early stage. It has not been used to start any pregnancies and doctors do not fully know the risks involved. Very few centres in the UK offer this.

Worrying about your fertility may seem especially hard when you are already coping with cancer. You may find it helps to talk things over with your partner, family or friends. If you prefer to talk to a counsellor, your GP or cancer doctor can help to arrange this. Many hospitals also have specialist nurses who can offer support, and fertility clinics will have a counsellor you can talk to.

Talking to other men in a similar position may help you feel less isolated. Macmillan’s Online Community is a good place to start. You can also talk things over with our cancer support specialists free on 0808 808 00 00.

Clinical Information Nurse Specialists
Our Cancer Information Nurse Specialists are dedicated cancer nurses available to talk to on our Macmillan Cancer Support Line.
0808 808 00 00
7 days a week, 8am - 8pm
Email us
Get in touch via this form
Chat online
7 days a week, 8am - 8pm
Online Community
An anonymous network of people affected by cancer which is free to join. Share experiences, ask questions and talk to people who understand.
Help in your area
What's going on near you? Find out about support groups, where to get information and how to get involved with Macmillan where you live.
Get help